Komiža is a fishing town situated in the south-western part of the Island of Vis. Since long ago its inhabitants have been engaged in fishing trade and agriculture. Komiža is the most renowned fishing town on the East Adriatic coast. Fishing in Komiža is still vital, which is obvious from a large number of fishing boats in the harbour, and 150 of its inhabitants still being engaged in fishing trade. In the past few years, the local people have dadicated themselves to tourism, an important economic sector in its own right. Among tourist facilities, the town boasts the Biševo Hotel, as well as additional 700 beds in private accommodation. Nautical tourism has been on the increase as well, bringing more navigaton experts to Komiža each year.

When it comes to monuments of culture, Komiža features the parish church of St. Nicholas ( the former Benedictine monastery, populary referred to as “Muster”), the Church of Our Lady of Corsairs, originally dedicated to the Annunciation of the Madonna, better known as Gospa Gusarica Church, the Fishing Museum, located in a fortress dating from the 16 th century. There are two small Churches (Church of Lady of seven sadness and Church St. Roco).

As for cultural events and entertainment, the so-called “Rota Palagružona”, the sailing route of the renovated gajeta falkuša (the traditional historic fishing boat of Komiža), as well as other old wood-boats, to the Island of Palagruža (located in the middle of Adriatic, some forty-two miles away from Komiža). An event traditionally taking place at the end of June.

From the 10 th to the 15 th of July the Big Game Fishing (deep-sea fishing), an international competition in tuna fishing in the Komiža archipelago, open to the competitors from Croatia and the neighbouring countries is held every year. Every night is measure the biggest tuna fish, and last years were tuna fishes heavy till 100 kilo. Also every night the visitors may ebjoy a concert of popular music, dancing and entertainment on the Riva (sea promenade).

Furthermore, there is so-called Ribarska noć (Fishermen Night), held on the first Saturday in August, offering local specialities, grilled fish, particulary pilchards; the traditional pogača of Komiža ( bread dough filled with salted fish, onions, tomatoes, parsley, and other spices), the brodetto (fish stew) made from varios fishes; octopus and squid (boiled, stewed, or grilled); and the last but not least, wine home-made from local grapes (Plovac and Vugava). In program is a concert of Dalmatian music, followed by an all night party.

In September the “Dani rogača” (days of the carob) are held, where various carob products may be tested, such as carob cakes, carob liqueur (rogačica), as well as carob-made souvenirs, all accompanied by a concert of klapa music (traditional a cappella singing), performed by singers from all over Dalmatia.

Among other things, Komiža also offers several organ concerts in St Nicholas’s and Our Lady of the Corsairs’ churches, the performances of the Amateur Theatre of the City of Vis, various exhibitions in the city reading room, poetry nights, concert of tin music from City of Vis, sports and games (streetball, volleyball), as well as klapa concerts performed by singers from island, including Split and other coastal cities.

Komiža is a town built in the original Dalmatian architectural style, with narrow streets, a sae promenada (Riva), joined with rosemary, fish and exclusive wines odours. Admirers of sport and active holidays can choose between paragliding, diving, football, tennis and cycling.

Island Vis is a famous of its beautiful beaches for enjoying in the sea and sun. Among those beaches there are Stiniva, Stončica, Milna, Zoglov, Velika and Mala Trovna, Pritiščina and beaches in bay of Vis and Komiža. In Vis, city beach near Issa Hotel and Grandovac, in Komiža beach Gusarica near Biševo Hotel, Kamenice, Novo and Storo Pošta, Mlin, Lucica, Žanićevo.

To be mentioned is island Biševo some four miles away from Komiža where you can come by excursion boats.

On Biševo is situated Blue Cave, the unique Adriatic phenomenon recommended to visit. On Biševo there are two beautiful sandy beaches Salbunara and Porat.

Area of Island Vis is 90 km2. Average annual temperature is 17 Celsius, which is pleasant for rest and amusement. Island Vis is situated on area of mediterranean climate with temperate and humid winters and hot and dry summers. Island Vis is away from continent thirty miles and closeness with Split by ferry boat lines and speed boat line. The surrounding sea area of the Island of Vis is renowned for its open-sea islands: the Island of Brusnik, Sv. Andrija (St. Andrew), Jabuka and Palagruža. The Island of Vis has been enlisted by the Worldwide Fund for Nature (WWF) among ten best preserved Mediterranean islands.

You are therefore urged to come to Komiža, which is sure to enrapture you with its beauty, its inhabitants with their hospitality, friendliness and eagerness to oblige, all of which is bound to make your holidays pleasant and unforgettable. 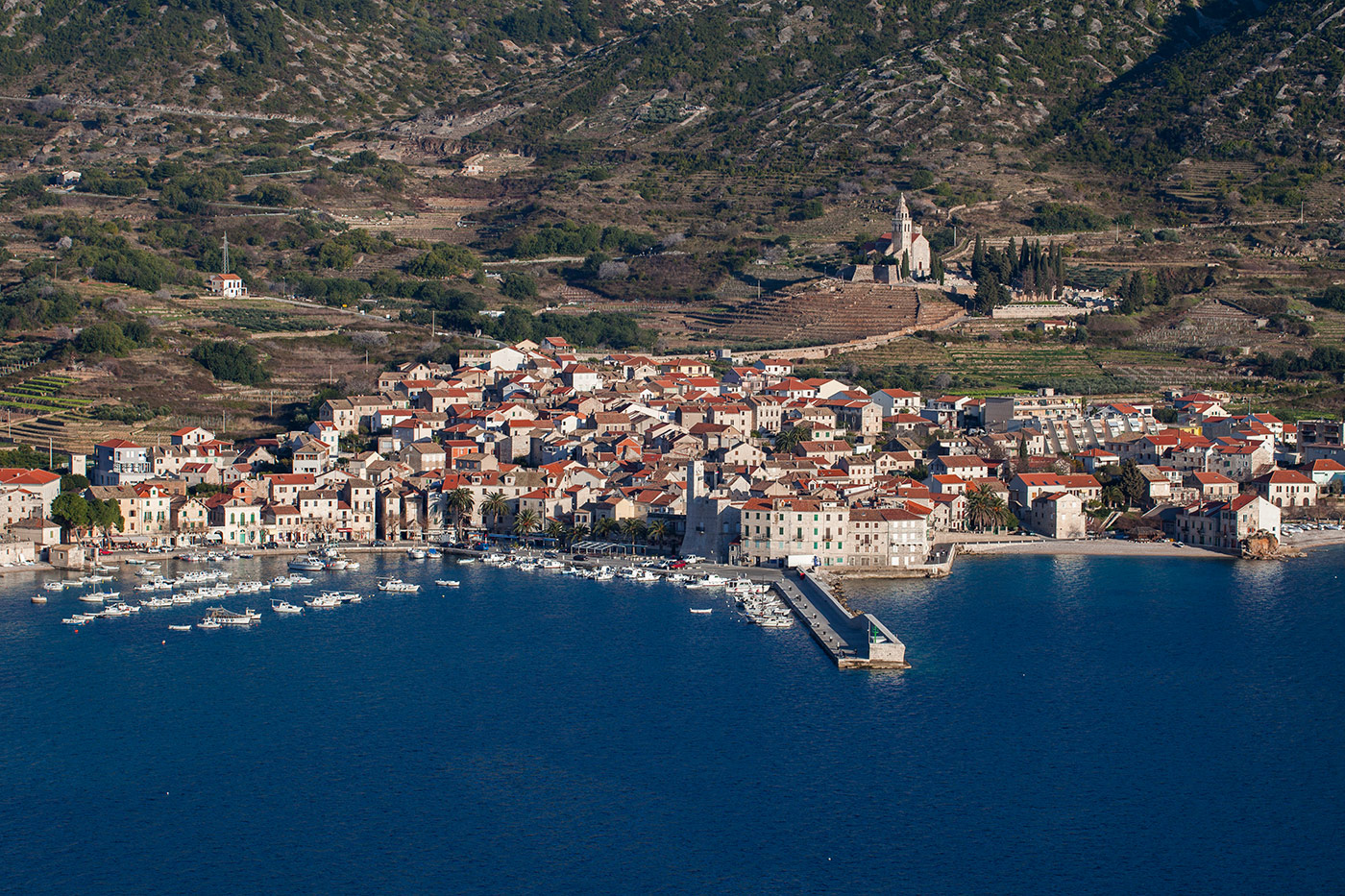